The current Nürburgring GP-Strecke circuit gives just a hint of what racing on the old Nordschleife was like.

Referring to the Nordschleife, the world’s longest, most challenging and most exciting racing circuit, our driver Jenson Button recently said: “people don’t drive around with Nürburgring stickers on their bootlids for nothing.”

Completed in 1927 and created to showcase German automotive talent, the original Nürburgring-Gesamtstrecke circuit, built around the village of Nürburg in the Eifel Mountains, was 28.3km long.

Sadly the full circuit is no longer intact because the Südschleife section had to make way for the modern Nürburgring GP-Strecke grand prix circuit. However, the 20.8km-long Nordschleife (or North Loop), which Sir Jackie Stewart famously called the Green Hell, to this day remains the most daunting circuit anywhere in the world.

The German Grand Prix stayed there until 1976 as the Nordschleife was modified year by year to appease growing concerns over its safety. That year’s race nearly didn’t happen when Niki Lauda called for another boycott. Other drivers voted against it and when the race went ahead it was Lauda who nearly died when he crashed at Bergwerk.

The Austrian, who went on to become a triple world champion in a McLaren, was pulled from his blazing car by fellow drivers Arturo Merzario, Guy Edwards, Brett Lunger and Harald Ertl. This disastrous event proved just how perilous the track had become for Formula 1 racing. James Hunt, driving a McLaren, was the man who took victory that day.

The Nurburgring GP-Strecke, completed in 1984, hosted Formula 1 in 1984 and 1985 before returning to the calendar in 1995 after a ten-year hiatus after which it resumed hosting races under different names – German, Luxembourg and European Grand Prix.

To this day, a further modified Nordschleife, featuring a whopping 154 corners, is open for public use as well as hosting endurance races. For a small fee (it’s officially still a toll road as it has been since 1927), you can even go and take it on in your own car! 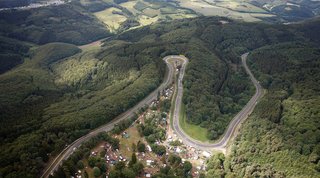 The Nordschleife began hosting grands prix in 1931, but all racing stopped during World War II. Action resumed in 1950 and it became the staple German Grand Prix venue until 1976.

During the early 1970s, it became clear the circuit was no longer safe for the latest generation of Formula 1 cars because of big bumps, surface and camber changes. Its length meant that marshalling it adequately was also a problem.