The scale of the Shanghai International Circuit is breathtaking. Built on marshland in 2003, the track sits on more than 40,000 stabilising concrete pillars and its infrastructure is bigger and bolder than at any other circuit on the Formula 1 calendar.

The track is a good technical challenge for the teams and drivers with some high-speed changes of direction and a 1km back straight offering a challenge to find the least compromised set-up. One of the most demanding corners on the lap is Turn One, a tightening right-hander entered at speeds in excess of 300km/h with an apex speed or 70km/h. It places the left-front tyre under prolonged stress, which has an impact on wear rates and race strategy.

Vodafone McLaren Mercedes has a strong record in the Chinese Grand Prix. The team has won the race three times and finished on the podium on seven further occasions.

You can stay up to date with all of the action as it unfolds throughout every session of the 2013 Formula 1 UBS Chinese Grand Prix on McLaren LIVE! Click here to view. 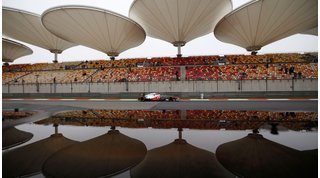 In 2004, the inaugural Chinese Grand Prix ended with the top three separated by just 1.4s. Kimi Raikkonen comes home third for McLaren-Mercedes, after sitting on the gearbox of Jenson Button from the second round of pitstops.

2010 was a classic Jenson Button victory. Light rain falls at the start of the race and Jenson stays on slicks while his rivals pit for Intermediates. When the rain stops and the track dries out, Jenson moves into the lead and is never headed.

On 19 October 2008 Lewis converted pole position into the team’s first victory in China. His fastest lap of the race emphasised his dominance and, as a result of this win, he only needed fifth place in Interlagos to clinch the world championship.