Which race is your favourite?

Which race is your favourite?

As chosen by our fans, here's five of the best McLaren moments at the home of the British Grand Prix.

Emerson Fittipaldi emerged victorious in a dramatic British Grand Prix in 1974, which featured seven leaders, numerous weather conditions and ended in a cloudburst which brought about a premature conclusion. Carlos Pace led initially, then Regazzoni, before Tom Pryce spun out from the lead. Scheckter took the lead, then Pace again, Scheckter, Jarier and James Hunt.

But as the Hesketh’s engine lost power, Fittipaldi took the lead on lap 43. The cloudburst arrived on lap 55, sending car after car into the catchfencing, but Emerson clung on and was declared the winner when the race was stopped after 57 of the scheduled 67 laps. 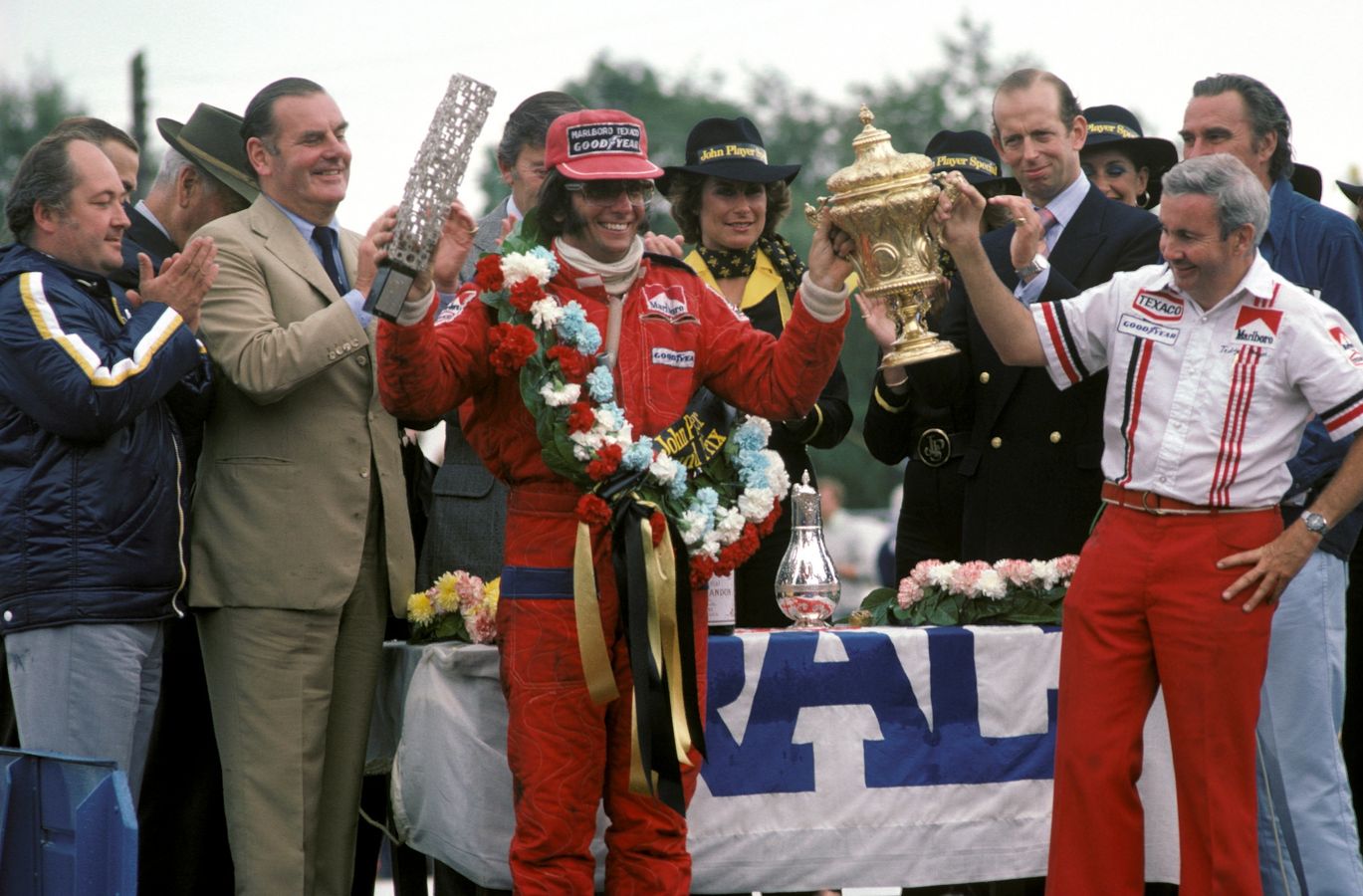 The turbocharged Renaults of Rene Arnoux and Prost were fastest in qualifying, with Watson in fifth, the fastest non-turbo car. After Nelson Piquet crashed his Brabham, Watson then overtook Reutemann and Andretti. Then when Didier Pironi’s Ferrari blew up he moved into third place behind the Renaults. Prost’s engine broke handing him second by lap 18. 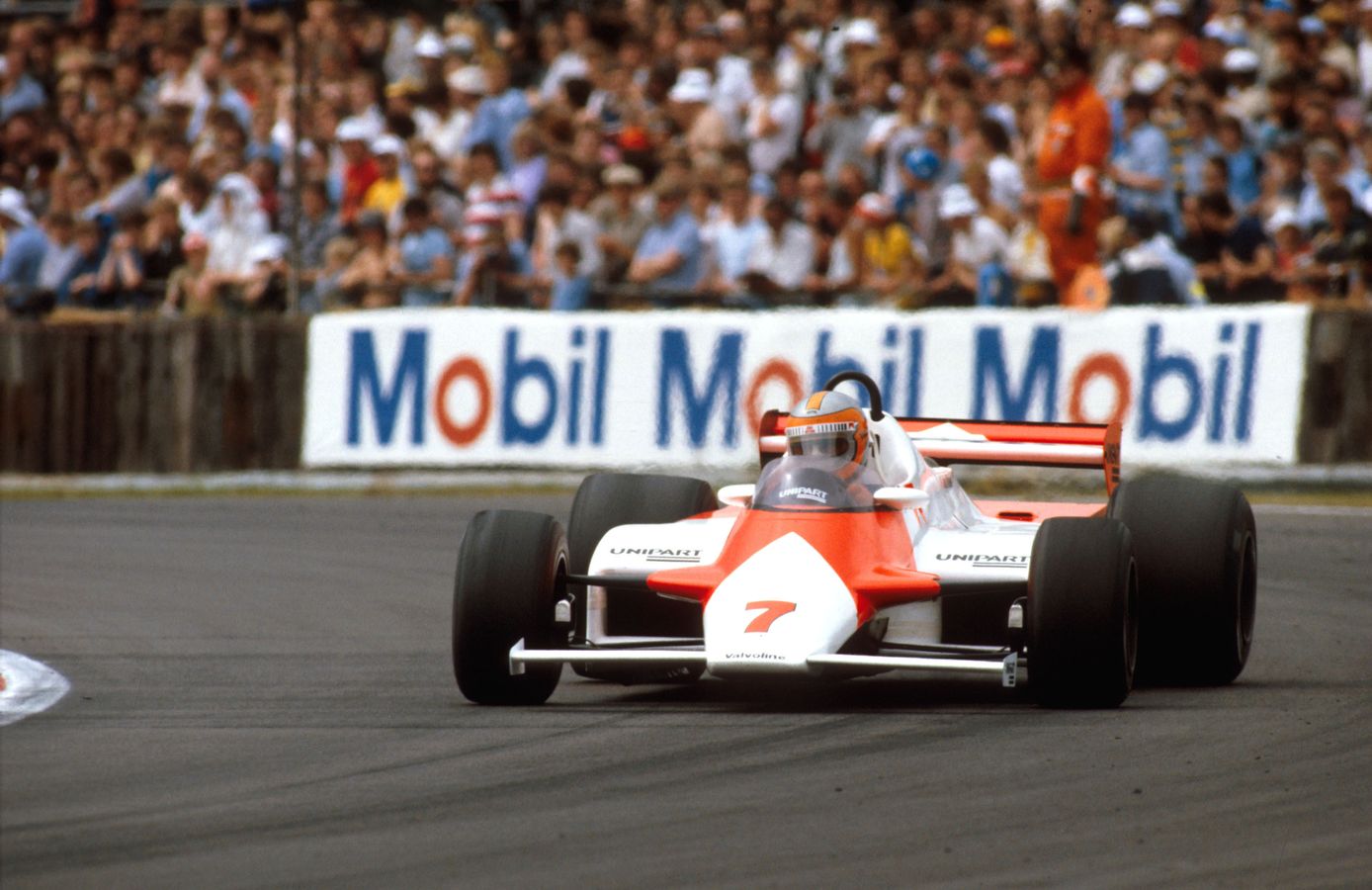 Ferrari took the front row of the grid with a new aero package but Ayrton Senna dominated in appalling weather conditions. Gerhard Berger led for 13 laps before Senna blasted by and sped into the lead.

He dominated to such a degree that by the end of the 25th lap he had already lapped his team-mate Alain Prost. This win was crucial for the Brazilian as it meant the gap to Prost who was leading the Drivers’ Championship now stood at just six points. 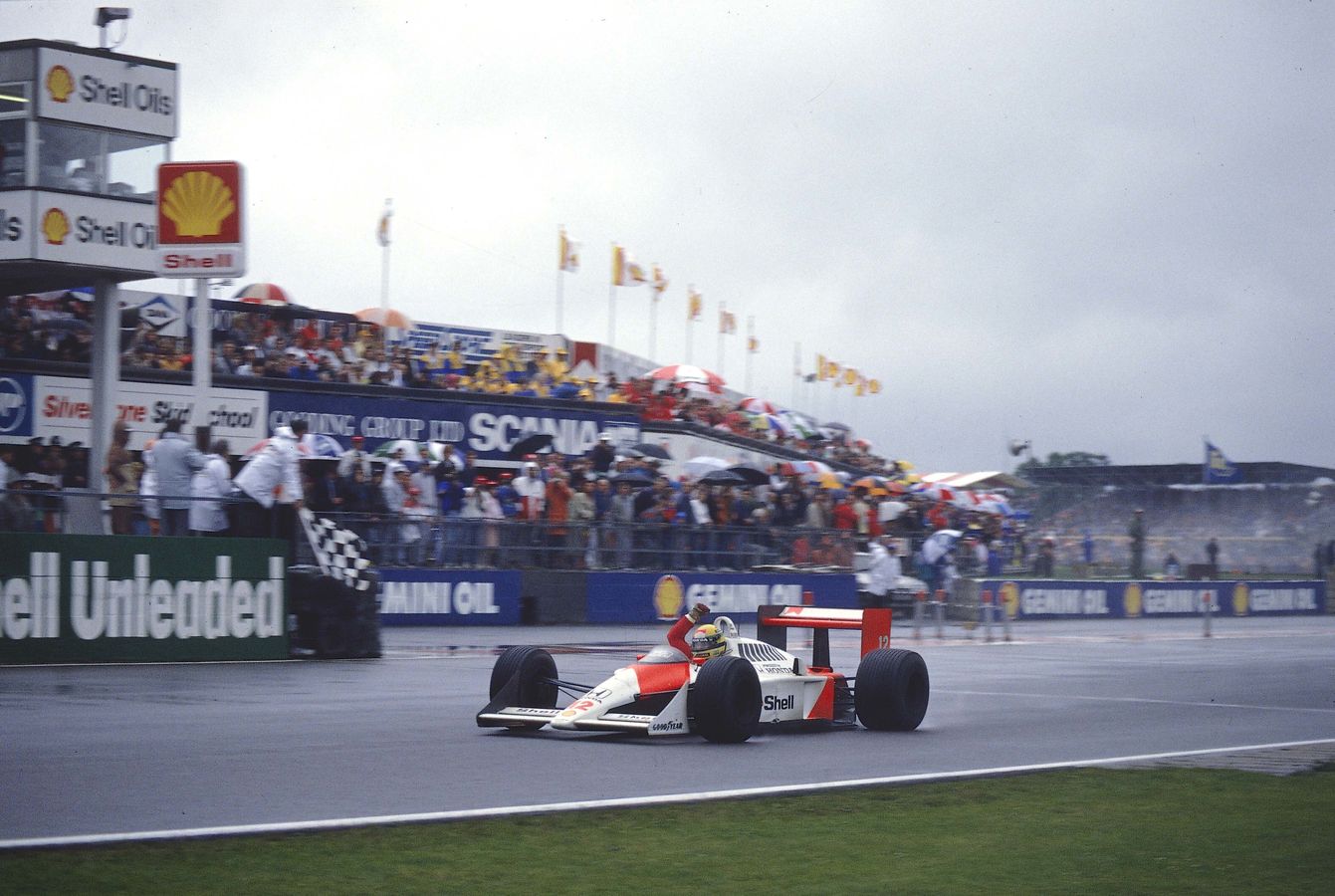 The first of back-to back victories. The Scot starts from third on the grid behind title challengers Michael Schumacher and his team-mate Mika Hakkinen. The German’s Ferrari gets a poor getaway and Coulthard passes him at the start. When Schumacher has an accident behind him, Coulthard is free to attack Hakkinen ahead.

The Finn is forced to retire after his left-rear tyre comes off, meaning the Scot cruises to the chequered flag to take his maiden home victory, a feat which he would repeat the year after. 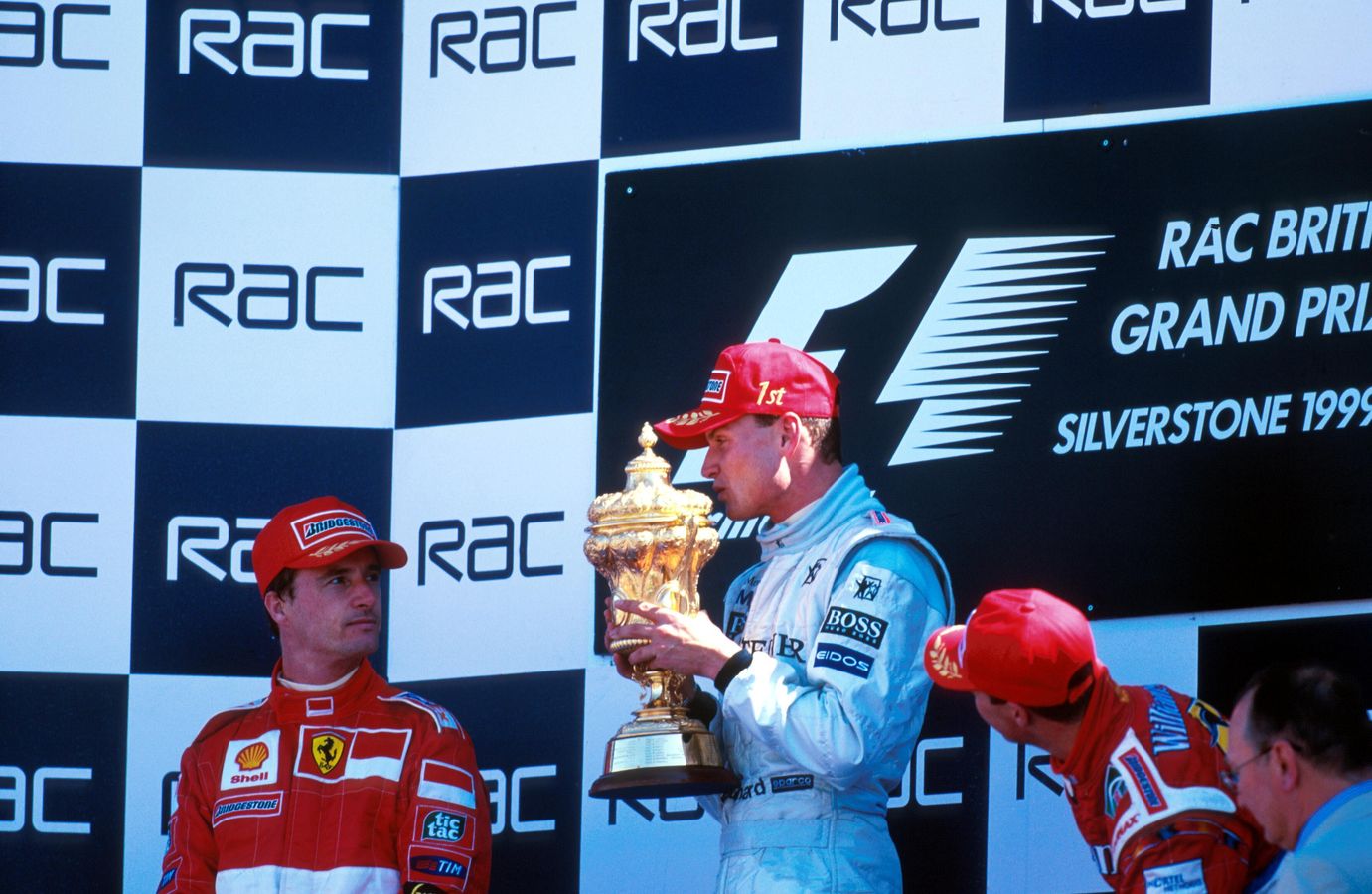 One of Formula 1’s great wet-weather wins. Lewis needed to regain vital momentum in the Championship battle. He would start from fourth on the grid. On Sunday the rain arrived exactly as expected, thoroughly soaking the circuit. Lewis began to deliver on those requirements the instant the lights went out, roaring past Kimi Raikkonen and Mark Webber and challenging his team-mate Heikki Kovalainen for the lead at the first corner.

By lap 5 he was past Heikki and heading off into the distance. As his rivals slipped away or spun out of contention, Lewis continued to lap so quickly that alarm bells began to ring on the Vodafone McLaren Mercedes pitwall, and his race engineer gently suggested over the radio that it might be a good idea to slow down.

To the delight of the home crowd Lewis crossed the finishing line over a minute ahead of second-placed Heidfeld, and a lap ahead of everyone from fourth place down. Ron Dennis summed up a remarkable British Grand Prix: “Above all it was a magnificent grand prix, full of drama, and it was won by a man who mastered the treacherous conditions faultlessly.” 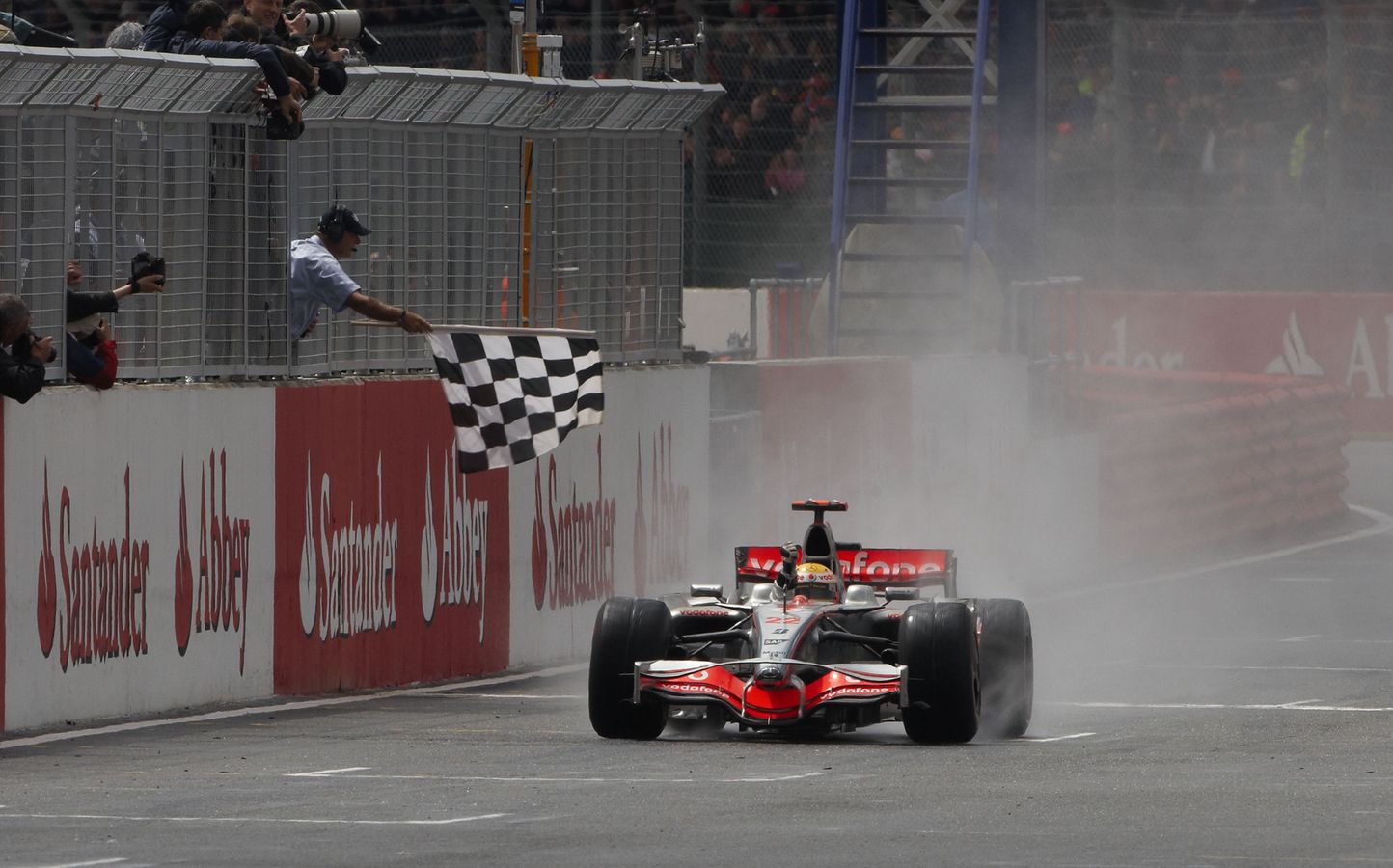 Which is your greatest McLaren victory at the Bristish Grand Prix?