One of the most revered racetracks in the world, Spa-Francorchamps featured on the inaugural Formula 1 World Championship calendar in 1950 and has retained much of its original high-speed character to this day.

There have been two iterations of the circuit. The first was designed in 1920, using public roads and the natural elevation changes of the local Ardennes countryside. This layout measured 14km and was extremely fast: F1’s final visit in 1970 saw cars averaging 150mph per lap.

A substantial redesign 30 years ago shortened the circuit to seven kilometres and made it safer, while still retaining many famous corners from the original layout such as Eau Rouge and Blanchimont. It’s now the longest circuit in F1 and a favourite among the drivers as a result of its challenging high-speed sweeps.

Average lap speeds are in excess of 140mph, which mean the drivers and engineers search for a good high-speed balance on their cars. Engine power and aerodynamic efficiency are also important because the cars are flat-out for more than 20 seconds between the La Source hairpin and Les Combes corner.

The fickle microclimate of the Ardennes can also play a role in the outcome of the race, too. Rain often plays havoc with race strategies, while also making track conditions treacherous, which is why the Belgian Grand Prix sees such a regular occurrence of Safety Cars.

McLaren has an enviable record at Spa. The team’s founder, Bruce McLaren, won at the track in 1968 and the team has taken 14 subsequent wins at the circuit. Jenson and Sergio will be hoping to add further to that tally this year. 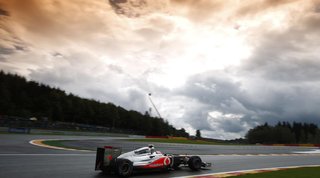 In 1968 Hulme leads for McLaren early on, but tace victory goes to Bruce McLaren in his M7A. It’s Bruce’s fourth grand prix win, but, crucially, It’s the first-ever victory for the McLaren marque.

Nivelles in 1974 is Fittipaldi’s second win for McLaren. He passes Scheckter for second on the first lap and takes the lead late in the race, crossing the line 0.35s ahead of Lauda (Ferrari) and wins McLaren’s first world championship later in 1974.

In 1982 at Zolder, the race takes place under a cloud, following the death of Villeneuve during qualifying. Watson starts 10th and works his way to the front, taking lead in the penultimate lap from Keke Rosberg and taking race victory.

The first of Ayrton Senna’s four Belgian GP victories for McLaren was in 1988. Alain follows him home to give McLaren its second consecutive one-two at Spa-Francorchamps.

1989 saw the third consecutive one-two for McLaren at this track. Ayrton is at his best all weekend. Alain fends off a spirited challenge from Nigel Mansell to come home 1.3s behind his team-mate.