The Bahrain International Circuit is the Kingdom of Bahrain’s only racetrack. It was designed and built by Tilke GmbH in 2003 and it hosted the inaugural Bahrain Grand Prix in April 2004. The race has been a regular fixture on the Formula 1 calendar since then, with the exception of 2011.

The 3.363-mile/5.412km track provides a complex technical challenge for the teams. The circuit has two clear overtaking places, into Turns One and Four, and acres of run-off. Its mix of long straights and predominantly low- and medium-speed corners force a compromise on car set-up, and this year’s race will also be the first time that Pirelli’s P Zero tyres and the DRS have been used at the venue.

Heat management is crucial, both for the cars and the drivers. Ambient temperatures regularly exceed 35 degrees and the cloudless desert skies push the track temperature towards 60 degrees – the highest of the year. Such extreme conditions affect tyre wear and result in the drivers losing up to three litres of fluid during the race. 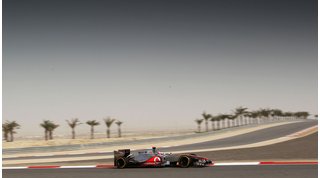 A mechanical problem in qualifying forced Kimi Raikkonen to start the race from last place in 2006. Undeterred, he raced up to 13th by the end of lap one and executed a perfect one-stop strategy to finish third.

The circuit was used as a winter testing venue in 2007 - a young Lewis Hamilton cut his teeth here ahead of his Formula 1 debut.

Test driver Pedro de la Rosa was drafted into the team at the 11th hour in 2005 to replace the injured Juan Pablo Montoya. He drove an attacking race to fifth, setting fastest lap on the way.