Between 1985 and ’95, the Australian Grand Prix in Adelaide became the venue for F1’s seasonal finale. However, since moving to Melbourne in 1996, Australia has become F1’s usual curtain-raiser, and its laidback and welcoming vibe make it the perfect location once again to kick off the FIA Formula 1 World Championship.

Situated in the seaside suburb of St Kilda, Albert Park is a temporary street track that invariably produces unpredictable and exciting racing. The reasons for this are manifold: the grand prix circus arrives after a winter of hibernation with form still uneven and difficult to read; factor in the dusty and constantly evolving track surface, the proximity of the barriers, a series of challenging high-speed corners and the constant threat of autumnal rainshowers and you have all the ingredients for a classic!

You can stay up to date with all of the action as it unfolds throughout every session of the 2013 Formula 1 Rolex Australian Grand Prix on McLaren LIVE! Click here to view. 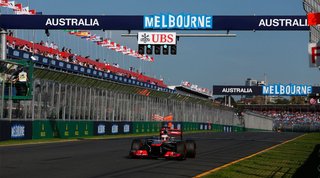 6 November 1993: despite fears from the team that he would run out of fuel on his final lap, Ayrton Senna secured pole position – his 46th for McLaren. The following day, he drove the active-ride MP4-8 to his 41st and last-ever F1 win.

27 March 2010: A strategic call for dry tyres on a still-damp track was the decisive move for Jenson, who moved from last to first in just 20 laps.

Barcelona day four : A positive end to three weeks of testing in Spain

Barcelona day three : The team to focus on a full day of running

Barcelona day one : With 100 laps on the clock, a positive first day

Barcelona day four : Pleased with progress after a full run

Barcelona day three : Jenson’s first day in the car at this week’s test