“It’s nice to be back on the podium – and, if I finish every remaining race in the top one or two, that’ll be perfect.

“During the first stint, I even thought I had a chance of winning because I was able to go longer than the cars around me. But then they didn’t seem to struggle much on the harder tyre, so the advantage swung away from me. I had a good second stint, but the harder tyre didn’t feel quite as good for me [as the softer tyre]. Then I didn’t really have good balance in the final 10 laps.

“I still have a slim chance of winning the drivers’ world championship, but I’m just enjoying my racing at the moment. I think our car will be competitive at Suzuka, and we’re doing a very good job as a team too. Of course, it’s disappointing that we had a reliability failure with Lewis’s car, so that’s something we need to solve, particularly as we’re doing such a good job in every other area.

“If we can solve our reliability issues, we’ll definitely have a chance of fighting for the win in all six remaining races.”

“It’s heart-breaking not to have finished the race today.

We definitely had the pace to win this weekend. In fact, before I retired, I was cruising; just managing the gap back to Seb [Vettel].

“Then I started to experience difficulty with the gearshift, then I lost third gear, and then the ’box kept dropping into neutral.

“Obviously, I was disappointed, but the good thing we can take away from this weekend is that we have extremely good pace. As a result, I think we can really attack in the next few races. It’s going to be hard to close the gap to guys like Fernando [Alonso] and Sebastian [Vettel], especially when they keep finishing race after race, but I’ll never give up.

“There are six more races, and I need to go and win all six.

“I’ll fight until the end.”

“Until his run was curtailed by gearbox failure on lap 23, Lewis was driving towards what would have been the perfect end to a weekend throughout which his pace had been consistently awesome.

“Clearly, for him not to have been able to score the 25 world championship points that his pace looked like netting him was a great disappointment for all of us at Vodafone McLaren Mercedes. But, as TV viewers the world over will have seen from his post-race interviews, Lewis is a fighter and he won’t give up.

“Neither will we. There are six grands prix left to run this season – which equate to a potential 150 world championship points for any driver to score – and you should be in no doubt that Lewis will be aiming to get as close to that 150 target as possible.

“In the constructors’ world championship, too, Vodafone McLaren Mercedes remains very much in the hunt – bolstered in no small measure by the 18 world championship points that Jenson’s solid run to second place occasioned here today. 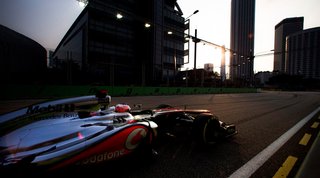