“It was a positive afternoon. I did a good lap on the Option tyre, the car is running well, and our upgrades seem to be working. But there are still some improvements to be made.

“The Option seems to be a bit easier for everyone as it’s softer and therefore more receptive to generating temperature. In P2, we also started to find a way to get the Prime to work, but then, later in the session, we couldn’t quite get back to that sweet-spot.

“If we can solve these issues with the Prime and get it into its correct working range, I think we can be quite competitive this weekend.

“There are a lot of quick cars out there, but, aerodynamically, I think we’ve got a strong car. We’ve just got to make sure that we make sure that the four things touching the road are working properly for us too.”

“The car already feels better than it did at the last race – there’s a good series of improvements within the car. My long run this afternoon was very satisfying and there are positives to take from that, but there’s still more time in the car, as Jenson showed.

“I struggled a little with set-up today. It’s a little bit inconsistent, so it’s very difficult to pinpoint exactly what’s needed to make it better. But we’ll be looking at the data to find out where the most significant issues are, and I’m confident we can make improvements overnight.

“Nevertheless, the upgrades we brought to this race seem to be working well and we’ve got good pace on the longer runs. The guys back at the factory did a fantastic job.

“It’s been a positive day and we’re in the fight.”

“It’s pleasing to hear both drivers express their initial satisfaction with the suite of upgrades we’ve brought to the circuit this weekend. It’s now time for the engineers to sit down and look in detail at the data to determine what’s working and in what areas we can make further improvements.

“The Circuit de Catalunya is always a very stern test of machinery, so it’s gratifying to see Vodafone McLaren Mercedes assume the top spot on the timesheets at this early stage of the weekend. It was a very strong lap from Jenson.

“Looking deeper at the timesheets, it’s clear that, once again, we’re set for an extremely finely pitched and closely fought race – it’s going to be a fascinating weekend.”

“I’m proud of my performance today, and proud of the team too. They did a great job: a real improvement with the pitstops, following our difficulties in that area recently. All in all, then, I think today’s result was the best we could do.

“I was the only driver to attempt a two-stop strategy, and I’m glad I was able to made it work. People often say that I have an aggressive driving style, but my final stint on the Prime tyre was 31 laps, so I reckon I proved today that I can make tyres last.

“It was a huge challenge to come through the field from the back, but I never gave up for a single second, right up to the finish line. Before the race I said I’d race my heart out, and that’s exactly what I did. For me, that’s what racing is all about.

“Today was all about damage limitation. But, now, looking at the bigger picture, I can’t really complain because, despite the setbacks I’ve had this season, I’m still only eight points behind the leader of the drivers’ world championship.

“The team has been working extremely hard, and our car is quick. So, when things go right, I think we’ll be in a great position – and it’ll come to us before too long.

“Finally, big congratulations to Pastor [Maldonado] and everyone at Williams – it’s a fantastic result for them and this is a great day for him personally.”

“Congratulations to Pastor! His was a great drive and I’m sure it will instil a lot of confidence in him and the Williams team.

“The Formula 1 form-book is very mixed-up at the moment, which is unusual, but that’s the way it appears to be going this season. As for us, well, a lot of my afternoon was spent stuck in traffic, and I had a Sauber breathing down my neck for most of the race. All in all, we weren’t quite quick enough today – but that’s something I need to solve myself. I need to find a set-up that suits me better as I feel like I have pretty poor grip at the moment.

“Having said that, I’m already looking forward to Monaco and a much better weekend there. It’s a circuit I love and hopefully a place where we can achieve a good result.”

“Before I say anything else, I want to offer my very hearty congratulations to Williams, to Pastor and particularly to Sir Frank for a stunning victory here today.

“For Vodafone McLaren Mercedes, following our disappointments yesterday, today was always going to be about recovery. Even so, Jenson will be disappointed: he struggled with balance and grip all afternoon, and won’t be satisfied with the brace of world championship points that his ninth place delivered him.

“Lewis, having started in 24th and last place following his qualifying penalty yesterday, drove an absolutely storming race to eighth place at the chequered flag, all but catching and passing Nico [Rosberg] for seventh place on the final lap. Like Jenson, he won’t be content with the four world championship points he earned this afternoon, but in truth he should be immensely proud of his performance here.

“Lewis was the only driver to make a two-stop strategy work today – and that, given that his race strategy called for him to drive exceptionally hard and extremely fast in heavy traffic all afternoon, pulling off some sensational passing manoeuvres on a circuit on which overtaking is notoriously difficult, was a truly magnificent feat.

“Make no mistake about it, the 2012 Santander Spanish Grand Prix was one of the most impressive races that Lewis has ever driven. His performance combined fabulous verve with commendable caution – and I’d go so far as to say that, rising above the frustration he inevitably felt yesterday evening, he’s inspired each and every one of us at Vodafone McLaren Mercedes with his stirring drive today.

“Jenson, too, is a past winner at Monte-Carlo, and, like Lewis, he’ll approach the dauntingly tortuous streets of the famous Principality with the forceful precision that marks out both our drivers as the superb World Champions that they are.

“They’ll both be aiming to win, of that you may be sure.” 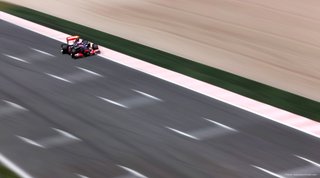