“Like the fans, we wanted a lot more from today’s result”

“It wasn’t a great race for me – I just wish we could have done more for the fans today. We tried as hard as we could, but we simply didn’t have the pace this afternoon.

“My tyres were still good at the end of my first stint, and I was able to hang on to Fernando [Alonso]. So it’s hard to understand how we could be leading the race at one point and then fall back to eighth place, especially as our car doesn’t feel bad overall.

“I raced my heart out and was flat-out right to the end. We’re still in the hunt for the world championship – and, if we can find a bit of lap-time, we can stay in the hunt, too.

“I gave the fans a little donut on the slow-down lap – simply because I wanted to say thank-you to everyone who came out to watch us here today. I’d love to have done better in my home Grand Prix, but, regardless, the fans were fantastic throughout the weekend.”

“It was good to get a point in my Grand Prix, but of course that’s not what we ought to be doing: we’re a front-running team and we’ve got a bit of work to do to start running at the front again. I don’t think we made any mistakes with our strategy today; we’re just not quite quick enough at the moment, that’s all.

“Most important of all, though, I’m a bit sorry for the Silverstone fans, because they’ve been truly amazing this weekend. Like them, we wanted a lot more from today’s result. So we’re sorry, guys; we weren’t able to fight at the front today, but hopefully we’ll be back there soon.”

“A dry race wasn’t what we were expecting – and, undoubtedly, had it been a wet race, as was predicted, our competitiveness relative to that of our opposition would have been significantly enhanced.

“Lewis drove an excellent stint on his initial set of Prime tyres, making consistent progress throughout the first third of the race. Thereafter, with hindsight, perhaps we should have given him more laps on his Options, because, from the very beginning of his third stint, he was never happy with his second set of Primes.

“For Jenson, the 2012 Santander British Grand Prix was always going to be a bit of a struggle, starting it as he did from 16th place on the grid. Again, as with Lewis, had it rained earlier this afternoon [rather than only after the race had ended], as it did yesterday and on Friday, and as it was forecast also to do today, undoubtedly he’d have been able to make up more places, more quickly, than in the event he did. As it was, he earned a single world championship point for his efforts, which was meagre reward for a pretty gutsy performance.

“Next we travel to Germany, and Hockenheim, the home Grand Prix of our engine partners Mercedes-Benz, whose Mercedes AMG HighPerformancePowertrains V8s have served, and continue to serve, us so well. But, before then, we’ll go back to Woking [Surrey, UK], to the McLaren Technology Centre, with a determination to work as hard as is humanly possible to develop our car such that we can put on a fine and competitive show in the homeland of the famous three-pointed star.” 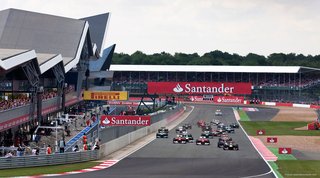 Jenson and Lewis present the London Grand Prix by Santander

A flash of Silverstone brilliance from Gilles Villeneuve