Since Alain Prost scored the first-ever Monaco victory for the team in a rain-soaked race back in 1984, we’ve enjoyed great success in the principality, winning on 15 occasions.

By 1986, Prost had won the race three times on the trot. He picked up yet another victory in 1988, after team-mate Ayrton Senna crashed out of the lead 12 laps from home.

However, Senna would make amends in 1989, finishing some 52 seconds clear of Prost.

Senna would keep on winning the race each year – by the time he had finished, he eclipsed Graham Hill’s long-standing record of five Monaco Grand Prix victories. In addition to his 1987 victory at the wheel of a Lotus, he won five times at Monaco  between 1989 and 1993.

One of the most memorable races was in 1992, when Senna took the lead from his fiercest rival that year, Nigel Mansell. Mansell had to pit after a wheel nut came loose on his car, and he emerged behind Senna. The two duelled for the final few laps of the race, but it was Senna who came out on top.

Mika Hakkinen won his fourth race of the season in Monaco in 1998, extending his world championship lead over team-mate David Coulthard to 17 points. Although looking back it seemed like a pretty straightforward race for him, Hakkinen considers it his greatest-ever victory.

In 2000, it was David Coulthard who triumphed in a crash-strewn race, finishing over 15 seconds clear of Rubens Barrichello’s Ferrari. He would become a double Monaco Grand Prix winner two years later in 2002 by spectacularly holding off Michael Schumacher’s Ferrari, which dominated most of that season.

Kimi Raikkonen won the 2005 race thanks to a great strategic call from our pitwall – the majority of cars in the field dived into the pits after a car crashed at Mirabeau, but Raikkonen was told to stay out and push as hard as he could, building an insurmountable lead.

Two years later, in 2007, it was Fernando Alonso who would win the race for Vodafone McLaren Mercedes. Lewis Hamilton was a mere four seconds adrift at the finish to complete one of the most dominant one-twos the circuit had ever seen – both drivers finishing well over a minute ahead of third-placed Felipe Massa’s Ferrari.

It was the team’s third Monaco one-two after Prost and Keke Rosberg in 1986 and Senna and Prost in 1989.

Hamilton won Formula 1’s crown jewel event himself a year later after kissing the barriers and suffering a puncture just a few laps into the race. After pitting for fresh rubber, he managed to keep a cool head through two safety car periods and tricky weather conditions to take the chequered flag. 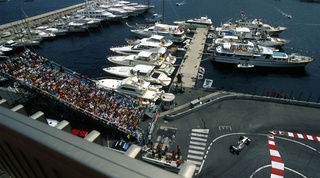