“I was told after the race that my car had suffered a rear anti-roll bar failure a few laps into the second stint. It was safe to drive – and I was trying my best with it, pushing all the way – but it was extremely hard to maintain a good pace. The balance was switching from corner to corner, the car was moving around along the straights, and it was eating up the tyres, which meant we lost further ground by being forced onto a three-stop strategy.

“To make things even more difficult, I then picked up some stray run-off Astroturf, which tangled itself around my sideboard winglet for the final few laps. It stalled the diffuser – so I had no rear downforce at the end, which made it even trickier to hang on to 10th place.

“In terms of winning the world championship, logic suggests that that’s probably it for me. Having said that, there are a lot of points still up for grabs, so I’ll keep pushing. Stranger things have happened, and I’ll never give up.

“It doesn’t feel great to experience days like these, but every cloud has a silver lining. Put it this way: it’s good to see what’s in your heart when you keep fighting. Days like these show the true spirit within.”

“I got a really good start and was able to get past both Mercedes. Into the first corner, there was a slight incident in front of me [when Sergio Perez braked late and tapped the car in front], so I was forced to run wide and push Nico [Rosberg] off the circuit.

“Nico and I then had a good drag-race down the back straight on lap one. I braked really late for Turn Three, then suddenly Kamui’s [Kobayashi] car was climbing all over my car’s right-hand side.

“It’s extremely disappointing. This is a long race, with so much opportunity for everyone. It’s a great circuit for overtaking, so it’s surprising to see people behaving like that on the first lap.

“His car suffered a rear anti-roll bar failure early on – and that destroyed his car’s handling balance and made it impossible for him to look after his tyres. The fact that he nonetheless hung on in there, through thick and thin, battling wheel to wheel with drivers whose cars were undamaged, was truly mighty.

“Then, finally, to add insult to injury, he picked up a strip of stray run-off Astroturf, and that further compromised his car’s performance – yet, even so, despite not being able to shake it off as it flapped about in the air-stream, he still clung on to 10thplace. Believe me, it was an epic, stirring, majestic drive.

“As for Jenson, well, what can I say? He made a very good start and would, I’m sure, have driven a great race this afternoon. But he wasn’t given the chance to show what he could have done because he was taken out, hit from behind, through no fault of his own.

“So today wasn’t a good day at the office, obviously. But motor racing is like that sometimes. And we’ll fight on. That’s what Vodafone McLaren Mercedes’ incredible team spirit is all about. That’s why McLaren has won one in four of all the grands prix that have been staged since our team first entered world championship grand prix racing 46 long years ago. And that’s why we’ll be moving heaven and earth to win the four grands prix that still remain this year.

“It won’t be easy, but I promise you we’ll all be giving it our very best shot.” 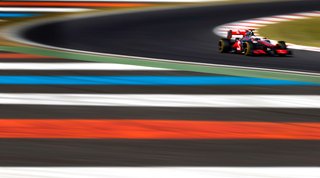