"Fourth definitely isn't a bad result – particularly considering I started from eighth. I ran as high as third during the first stint, but in hindsight it was probably an error to make our first pitstop so early. Both Kamui [Kobayashi] and I were compromised behind a Toro Rosso, and that cost both of us a bit of time to Felipe [Massa]. He'd started on a brand-new set of tyres, and that makes a big difference: you can go longer and keep the speed up, so he was able to jump both of us after the first stops.

"Towards the end, I was able to push and start catching Kamui. But he controlled his final set of tyres very well – I could get close to him, but the only way I was going to get into the DRS zone was by braking extra-late into the chicane, and, every time I tried, I locked up and ran wide.

"Still, this result isn't too bad – we got some more points – we just didn't have the pace to go for the win today."

"Congratulations to Jenson – he drove well all weekend, and, between us, we got some decent points for the team today.

"I was very fortunate to stay out of trouble at the start; there were lots of cars going off the track, so I just concentrated on bringing the car through undamaged.

"I pushed as hard as I could throughout the whole race. It was a bit of a struggle in the first stint – I had a lot of understeer – but after a while the car started turning again. From that moment on, it felt really good, and I was able to push; but it was too late to have much of an effect on the result.

"This just wasn't the weekend for me. With better qualifying, we can get better results – and that'll be our aim in South Korea next week.

"I'm already looking forward to it."

"When you consider that Red Bull's drivers lined up for this afternoon's race from P1 and P2, and our two drivers started it from P8 and P9, the fact that they extended their constructors' championship lead over us by just five points has to be seen as a decent bit of damage limitation on our part.

"Both Jenson and Lewis drove good and combative races, scoring 22 world championship points between them; but, obviously, given our impressive points-scoring record over the past few grands prix, we'd hoped to achieve rather better than fourth and fifth when we arrived in Suzuka earlier this week.

"We didn't optimise our performance in qualifying yesterday, and today we struggled with our tyres at various times during the race. Moreover, Jenson was unlucky to get stuck behind Daniel [Ricciardo], and lost quite a bit of time after his first pitstop as a result.

"Lewis's second stop was excellent – a superb strategy call backed by super-slick work by our pitcrew – and as a result Lewis emerged from the pitlane more or less alongside Kimi [Raikkonen], edged ahead of him through Turn One, then skilfully held him at bay and collected 10 valuable points for fifth place as a result.

"From Japan we fly to South Korea, where we'll be looking to score strongly. The tussle for this season's world championships – both drivers' and constructors' – will be extremely hard-fought. But all at Vodafone McLaren Mercedes will dig very deep over the final five grands prix in a big effort to ensure that we're right there, in the mix, competing for ultimate honours, when the dust finally settles on what's shaping up to be an extremely exciting battle. 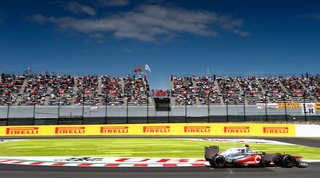