Brazil has been a happy hunting ground for McLaren over the years. We’re the most successful constructor in terms of Brazilian GP wins, with 11 victories to our great rival Ferrari’s 10.

Like many long-lived events, the Brazilian GP has had more than one home – but our story begins with its present venue, Interlagos. The city of São Paulo has grown and enveloped it over the years, but one thing hasn’t changed: the passion of the local crowds. The original Interlagos crammed nearly 8000 metres of asphalt into the same area as the present layout, and you can still see echoes of the past today.

Brazil had hosted non-championship Formula 1 races, but when local hero Emerson Fittipaldi claimed the World Championship in 1972, a Brazilian Grand Prix just had to follow. Sure enough, in February 1973 Emerson launched his home grand prix in perfect style by bringing his Lotus across the finishing line first, followed by Jackie Stewart, with Denny Hulme third for McLaren.

By the end of the year, though, it was Stewart who won the drivers’ title and Emerson decided to join us for 1974, partnered with Denny. Motorcycle champion Mike Hailwood raced a third McLaren in Yardley colours.

The 1974 season began in January with two races in South America. Denny got us off to a winning start in Argentina, then two weeks later Emerson put his M23 on pole at Interlagos. He dropped to third at the start as Carlos Reutemann took the early lead for Brabham. The summer heat, combined with the circuit’s relentless corners, began to take their toll on Reutemann’s tyres and he fell back; Emerson chased the new leader Ronnie Peterson, passed him as they came up to lap the backmarker Arturo Merzario, and then dominated the rest of the race. It was Emerson’s first win for McLaren, and it provided the launching pad for a successful campaign – Emerson took the drivers’ title again, while we brought the constructors’ trophy home for the first time.

The advent of ‘ground effect’ aerodynamics in the late 1970s brought the curtain down on the first era of Interlagos. Higher cornering speeds made the circuit’s tight confines increasingly dangerous, and the stiffer suspension set-ups required to make the aerodynamics work proved ill-suited to the bumpiness of the track surface.

Perhaps more to the point, Emerson was reaching the end of his F1 career and Rio de Janeiro native Nelson Piquet had become the Brazilian public’s F1 comingman. In 1978, and then from 1981 to 1989, the Brazilian GP moved to a new circuit near Rio. The Jacarepagua track was entirely different in character, built on reclaimed swampland and entirely flat.

1984 was a landmark year for us, for it was our first full season with the twin-turbo TAG V6 engine and the new MP4/2 chassis which had been designed specifically to accommodate it. The TAG engine’s sophisticated fuel injection system meant that it was less receptive to higher turbo boost settings than some rivals, so we didn’t always qualify on pole position – but it was easily the most efficient engine on the grid.

The Brazilian GP was the first race of the 1984 season and Alain won from fourth on the grid, though he ultimately lost out to team-mate Niki Lauda (who retired from the Jacarepagua race with an electrical issue) by half a point. Alain qualified sixth in 1985 but took the lead on the 19th lap and was never headed.

By 1987 our rivals had got back on par as Honda made great strides with the power and tractability of their V6 engine. Though our venerable TAG engine was coming to the end of its competitive life, it was still the most fuel-efficient engine on the grid and gentle on the tyres. Alain qualified fifth for the 1987 Brazilian Grand Prix, took the lead at the second round of tyre stops, then stayed out while his chief rivals all had to pit again. He crossed the line 40 seconds ahead of Piquet’s Williams-Honda.

São Paulista Ayrton Senna joined us for 1988, along with Honda power. Once again the Brazilian GP opened the season and Ayrton claimed pole aboard his MP4/4, only for it to stick in gear on the parade lap. He swapped to the spare and started from the pitlane, charging spectacularly through the field, but was ultimately disqualified; Alain won from third on the grid.

Ayrton’s success prompted his home town to invest in its own circuit, now officially renamed the Autódromo José Carlos Pace after the 1975 Brazilian GP winner, who perished in a plane crash in 1977. In 1990 Ayrton lined up on pole, alongside his new McLaren team-mate Gerhard Berger, as the Brazilian Grand Prix returned to its roots. The track was 3.5km shorter but still retained much of the original layout, turning left at the end of the main straight to cut out a fast bend which had no run-off.

Ayrton led the race until he tangled with backmarker Satoru Nakajima and had to stop for repairs. In 1991 he finally won his home grand prix, but it is the 1993 race which probably ranks among his greatest.

Following Honda’s withdrawal from the sport we were running customer Ford engines and faced a considerable horsepower deficit to the dominant Williams-Renaults. But rain is always a great leveller and Ayrton was at his majestic best to claim victory in a chaotic race: starting from third, Ayrton avoided a first-corner accident involving his new team-mate Michael Andretti, only to be handed a penalty for overtaking under yellow flags. He came out of the pitlane in fourth place just as the circuit was engulfed in a rainstorm. Advantage Senna. This would be our 100th grand prix victory.

Mika Hakkinen and David Coulthard utterly dominated the 1998 race, starting first and second and finishing one-two. Mika’s gearbox developed a temporary glitch during the 1999 grand prix, dropping him from first to third place in the opening laps before the issue resolved itself. Mika then maximised the MP4/14’s capabilities to get back into contention, pressuring Ferrari’s Michael Schumacher and then taking the lead to win by 4.9s. Mika stalled on the start line in 2001, bringing out the Safety Car, but David drove tenaciously in changeable weather conditions to beat Schumacher by 16s.

In 2004 Brazil moved from its traditional slot near the beginning of the season to one at the end. It was inevitable that Interlagos would one day host a climactic title showdown. For 2005 it shunted forward two places to make way for Japan and China but it still proved crucial to the outcome of the drivers’ title: Kimi Raikkonen had won as many races as Renault’s Fernando Alonso but collected fewer points elsewhere, leaving him trailing with three races to go. Juan Pablo Montoya and Kimi finished one-two for McLaren in Brazil but third place was enough for Alonso to put the title out of reach.

The 2007 Brazilian Grand Prix was as tense a race as we had ever endured until that point. Our drivers, Fernando Alonso and Lewis Hamilton, were among three in contention for the championship but Lewis was the one in the lead. In a dramatic sequence of opening laps he slipped to eighth place, fought back to sixth, then slowed almost to a halt as his MP4-22 lost drive.

Fernando was running third behind the two Ferraris – not enough to take the drivers’ title – as Lewis finally managed to reset his car’s on-board systems and get going again in 18th place. Remarkably, he fought back to seventh place, still closing on the drivers ahead, but it was not quite enough: Kimi brought his Ferrari over the line first to win the title by a point from Lewis and Fernando, who ended the season tied on 109 points.

No one could have predicted that the 2008 Brazilian GP would be even more dramatic. Lewis had the edge over Felipe Massa in the title standings but Massa did everything expected of him at Interlagos, qualifying on pole and leading throughout.

Even so, Lewis only needed to finish fifth to secure racing’s ultimate prize, and he was running fourth when the rain began to fall in earnest with just a few laps to go…

Lewis and the rest of the leaders pitted for intermediate tyres, but Toyota opted to roll the dice and leave their drivers out on slicks, promoting Timo Glock to fourth. Lewis was fifth after his pitstop but then slid wide and lost the place to Sebastian Vettel.

Lewis couldn’t match Vettel’s pace but they were both catching Glock. Would they pass him in time, though? On the last lap we could see from the GPS data that Glock was starting to struggle. We urged Lewis on and he slithered past the Toyota at the last corner. With Vettel already through, that gave Lewis the fifth place he needed to take the drivers’ title by a single point. 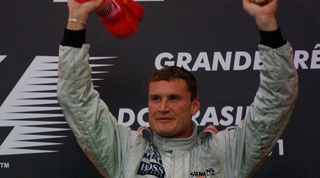