“Two big races remaining to get back to the front”

“Congratulations to Kimi [Raikkonen] – he’s a man of few words, but he’s all about racing. He deserved this victory today.

“For me, it was quite a fun race. I had a few good battles out there – with Mark [Webber], Sebastian [Vettel] and Pastor [Maldonado] – and they were particularly good fun. But, unfortunately, I didn’t have the pace in the car to take the fight to the leaders today.

“The car felt very different from how it had on Friday – I just couldn’t find the grip, which was strange. And, at the end, I couldn’t have kept Sebastian back – he was on newer Options [tyres], so it was impossible to get the same amount of traction from my older Primes as he was getting from his newer Options.

“Lewis’s retirement meant we dropped more points to Ferrari in the constructors’ world championship. That was a great pity, but we have two big races remaining in which to make up the balance.”

“I’m gutted; I’d had really good pace all weekend and I feel certain we could have won today.

“I had a fuel pressure problem – it was very sudden, I was just entering a corner and the car just died on me.

“The only mistake I made all weekend was having a brief moment on lap two, when my brakes weren’t fully up to temperature and I locked up into Turn Eight. After that, however, everything was going really well. The car was a dream to drive – I was cruising and still pulling away when I had my problem.

“Nonetheless, we’ll have more opportunities in Austin and Sao Paulo. I hope we can get back to the front – I’d love to take a win or two more for Vodafone McLaren Mercedes before the end of the season.”

“From the point of view of sheer pace, Lewis totally dominated the 2012 Abu Dhabi Grand Prix weekend – until loss of fuel pressure ended his race when he was serenely managing a comfortable lead.

“Until that point, he’d had the race in the bag, and it goes without saying that the entire Vodafone McLaren Mercedes team is absolutely gutted that through no fault of his own he wasn’t able to win here today. Lewis, too, is understandably disappointed – but he’s also as keen as mustard to give it his very best shot to win the season’s final two grands prix, at Austin and Sao Paulo.

“Jenson, too, drove a gutsy and spirited race, ending up fourth, having been overtaken at the end by Seb, who was on fresher tyres [than Jenson was] and whose car had been re-geared prior to the race for better top speed.

“To Kimi, who is of course an old friend of ours, having won nine grands prix for McLaren Mercedes during his time with us [2002-2006], I want to say ‘Well done’. Today we saw a great drive by a great driver.

“Last, here are two brand-new McLaren-related milestones for all you train-spotters out there. First, until Lewis’s race came to an end on lap 20, he’d taken McLaren’s aggregate of kilometres spent in the lead of world championship grands prix past the 50,000km mark. And, second, in scoring 12 world championship points for fourth place, Jenson established a new benchmark in Formula 1: 56 points-scoring grands prix on the trot for Vodafone McLaren Mercedes, eclipsing the previous record which had been held hitherto by Ferrari.

“Neither of those stats provides much comfort today for anyone at Vodafone McLaren Mercedes, but they certainly both bear witness to a truly impressive magnum opus of on-track McLaren achievement in Formula 1, going back all the way to 1966, and I salute all the many men and women whose sterling efforts have contributed to that. 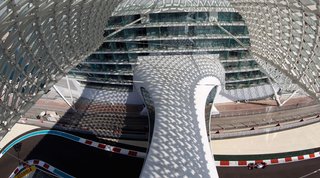