There’s no escaping the fact that the costs of testing a car in the physical realm continue to escalate, as does the complexity of their design. It’s left many automotive businesses looking for ways to expedite the design process without hindering car performance or reliability, and all while trying to reduce costs. But just how can they achieve this?

The answer is simulation.

It is an area in which McLaren Applied has over two decades of expertise, having used advanced simulation, data analytics and modelling to translate insights from the virtual world into the real world to improve performance of Formula 1 cars.

In 2015, we took the science behind the McLaren Formula 1 simulator and tailored it to the requirements of the road by partnering with world-leading test systems experts MTS.

The result? The MTS Vehicle Dynamics Simulator (VDS). A next-generation driver-in-the-loop simulator, engineered to accelerate and streamline the development process of road vehicles – from supercars to passenger and commercial vehicles – for automakers and Tier 1 suppliers.

But just how is the VDS changing the game for the automotive industry? What sets it apart and how is it playing a crucial role in the development of McLaren Automotive’s critically acclaimed cars?

Ahead of the game

The beauty of the VDS is that it allows you to iterate far quicker than you would be able to test physical components. With the VDS, you can optimise parameter values and pre-empt issues before you invest time, money and effort into producing real parts. It turns the tables in the design process by making it more proactive as opposed to reactive, and significantly reduces the time needed to develop and build a vehicle.

The VDS is a powerful tool for de-risking, which means a lot of the hard work can be done before even reaching the stage of creating physical components. It’s an advantage that really pays dividends when wanting to incorporate brand-new technology or a combination of technological innovations that haven’t previously been used together. With less precedent comes greater risk that systems may not interact as intended.

Imagine this scenario: you've invested a huge amount of resource and time into designing a new component, but then full vehicle performance isn’t as expected when tested. You must then go back to the beginning and embark on the process again: designing, producing, building, testing. And even after doing all this once more, there is no guarantee of solving the problem. It’s like an engineering version of Groundhog Day, just without Bill Murray and Andie MacDowell.

However, with the VDS it's possible to change parameters to replicate any physical change in just a matter of minutes and accelerate the iterative process. It gives users the chance to realise the advantages offered by a rapid, race-derived iteration cycle that originates from the world of Formula 1. This presents an opportunity, as swift iteration is a key factor in successful cutting-edge design and bringing a product to market fast enough to establish first-mover advantage.

The suspension design for the McLaren P1 and 720S was done with the help of the VDS, and McLaren Automotive continues to actively use the VDS when developing all its cars. For the 720S, it was used to develop the acclaimed semi-active suspension system – Proactive Chassis Control II – which combined cutting-edge suspension hardware and software to deliver compliance without compromising body control at the limits of adhesion.

During initial testing in the VDS some unexpected state estimator behaviour was observed. Remedial actions were proposed and tested in an incredibly short timeframe; these fixes were then proved out later in the programme when physical testing started. The car subsequently received plenty of plaudits, garnering praise for its ride quality, handling and driver engagement.

In the case of the P1, a novel hydropneumatic suspension concept, the Race Active Chassis Control – and its control system – was developed, optimised and signed off in the VDS long before building the first prototype vehicle.

Putting aero to the test

The VDS is also an ideal tool for defining vehicle level attributes, such as aerodynamic sensitivity. Generating a certain amount of downforce or aerodynamic efficiency in the physical domain can require a huge amount of design resource. The VDS changes the game, allowing you to iteratively define and test ‘macro’ characteristics – such as aero balance shift as function of speed – in a way that would be difficult and time-consuming to test on a car.

This approach sees the simulator become a target-setting tool. For example, you may find through testing that a shift in aero balance with speed imparts a feeling of confidence to the driver. This then informs aerodynamic specification and presents the designer with a choice of approaches to achieve the targets.

The philosophy is at odds with basing aero targets largely on small incremental changes from the previous car you manufactured. Without simulation, relying solely on the physical domain is a method that brings limited validation of direction and can prove costly when it comes to the constant production of physical parts for testing.

Tyres are incredibly sensitive and it’s easy to underestimate how much effect they have on vehicle dynamics, especially regarding high-performance vehicles. For supercars like the McLaren P1, you need to have a tyre that’s been developed to suit the specific suspension characteristics of the vehicle.

However, this is not an exact science. There is a lot of iteration involved, and it boils down to a combination of chemistry and construction. Even the subtlest change can perceptibly influence vehicle dynamics, such as the construction of the bead of the tyre.

At a relatively early stage in development, the VDS gives you the opportunity to set out and validate component targets based on your projected vehicle specification. It means that before you’ve even got a physical car, you can go to a tyre manufacturer and specify what cornering stiffness, grip and load sensitivity characteristics you want to complement the suspension characteristics. Once again, it's a case of the VDS helping to ensure the car performs as anticipated and gives you a head start.

For information about our Vehicle Dynamic Simulator, click here.

To book a demo at the McLaren Technology Centre, please email us, here. 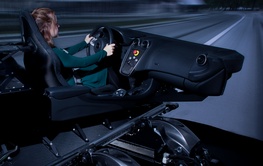 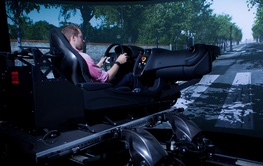 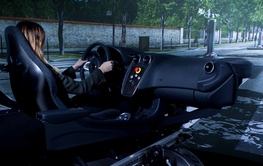