“Are you not entertained? Is this not why you are here?”

This was the dramatic proclamation from Maximus Decimus Meridius, played by Russell Crowe in Ridley Scott’s epic 2000 hit film Gladiator, after he annihilated his enemies in front of an astonished audience. The quote immediately becoming immortalised in the pantheon of pop culture’s greatest references.

But it begs the question, why do you watch grand prix racing?

Whatever your response, it’s the right answer because a combination of many elements give the sport its enduring appeal. That je ne sais quoi which makes the hair on the back of your neck stand on end, and drags you out of bed at some ungodly hour of the morning to watch free practice for the Australian Grand Prix.

Nevertheless, speed and technology are key players in this conundrum. The sport a global behemoth that is perceived as a cut above any other in both respects. It must constantly remain at the forefront of technological innovation.

And this has been confirmed by our primary research – our largest-ever fan survey – as part of our vision for the future of grand prix racing in 2050. Inspired by the fans, we turned to our experts in powertrain, aerodynamics, design, materials technology, data science and human performance to envisage the sport three decades from now based upon key industry trends and fields of research.

A realistic blueprint for the sport as we race towards industry 5.0. The advent of smart cities and mass adoption of autonomous vehicles, as well as clean and renewable energy sources, on the horizon. Lifestyles are evolving rapidly. Societal norms and conventions becoming more fluid. Boundaries blurred.

Bringing the show to you

Smart cities will give us the chance to put the action on people’s doorsteps. We’re going to see more racing take place where the fans are, as part of a continued effort to bring the show to them.

Our 2050 concept proposes that the race cars will be able to travel at speeds of 500 km/h, and cover ground at an even more ferocious pace than is currently the case in Formula 1, raising the possibility for race tracks which span far greater distances.

Why confine the grand prix cars of tomorrow to the tracks of today?

Take the temple of speed that is Autodromo Nazionale Monza, with its historic banking, and put it on steroids. The Italian Grand Prix of 2050 would still run through the heart of one of the largest historical parks in Europe, but go on to scythe its way through the streets of Milan city centre, before making its way back to the leafy park.

Ultimately, the sport must become more accessible to the fans.

That’s a line that has become something of a cliché when it comes to grand prix racing. The word ‘accessible’ bandied about almost as much as ‘Brexit’. Although progress has been made, it’s fair to say the sport has only scratched the surface. Part of increasing accessibility will rely on communicating what goes on off the track far better by 2050.

A lot of casual fans will watch the race, or maybe just the start, pit-stops and the finish. However, they won’t necessarily know much about the off-track narrative that accompanies the on-track action throughout the season. And yet it’s one of the most entertaining aspects of the sport. The subterfuge and political machinations that would make Machiavelli proud. The relentless evolution of a car that makes even Jay-Z’s rapid lyrical flow seem somewhat slow.

Fans need to know where the real rivalries are – where the needle is – so that when everything comes to a head on the track and plays out in front of them, the picture becomes that little bit more three-dimensional.

Of course, we cannot ignore the elephant in the room and that is the spectacle of racing.

Our vision of the future proposes that cars will feature active aerodynamics and an on-board AI co-pilot. And that’s just for starters. But for this to improve the spectacle of the sport, it all depends on how the technology is deployed. It must be done in such a way that adds authentic uncertainty. I appreciate that sounds like a contradiction in terms, but bear with me.

Active aerodynamics are nothing new to grand prix racing. Just look at the drag reduction system (DRS). The motivations for it are sound. To help a faster driver overtake a slower driver, in an age where cars are now so aero dependent that without DRS it would appear to be easier to do a triple Salchow on your first trip to an ice rink.

Its failing is its inauthenticity. No, not the figure skating, I mean the DRS. It doesn’t sit well with the purists and is viewed as something of a gimmick by many casual followers.

Give teams the opportunity to really push the boundaries of active aero as part of their natural car development, and suddenly you have the adoption of a technology that has the possibility to dynamically alter the outcome of a race in an authentic way as drivers battle it out. You have a more compelling entertainment proposition on your hands.

We must provide a platform which rewards driver skill, but also showcases their personality. Their emotion. Our 2050 concept car – MCLExtreme – pioneers sentiment projection in racing. It displays what’s going on inside the car, under the skin of the driver, and equally the hopes and fears of spectators are reflected inside the cockpit for the driver to see. A honed athlete hidden behind a corporate fascia just won’t cut it in 2050.

We mustn’t let grand prix racing become so advanced that it's accepted that it's all about the performance of the car rather than the driver, if you want to stand on the top step of the podium and enjoy more champagne showers than James Hunt on a night out. And choosing which elements of the car are standardised will be crucial in enabling the talent behind the wheel do the talking.

Standardisation is nothing new. McLaren Applied has been supplying race series and teams with a portfolio of high-performance products for years. From electronic control units and sensors, to digital dashboards.

It’s one of our fortes and it’s in keeping with a world heading towards the proliferation of standardised hardware as it looks to control costs, while software becomes the key performance differentiator.

A software/hardware dual approach is becoming commonplace in the automotive industry. We’re seeing the emergence of a hardware agnostic-platform. Software, tuned for each chassis by each manufacturer is where the differences are made.

With the sport adopting this approach, overall development costs can be slashed which will lower the barrier to entry so that new teams and companies can participate without facing a near-vertical wall of unnecessary cost.

In 2050, McLaren Applied could supply every team with a comprehensive package of standard parts. A broader product portfolio that goes beyond ECUs and sensors, and includes electric motors for example.

But crucially, engineers will be given free rein when it comes to the software so that teams can still exploit and develop each system to get the best performance from it. That’s exactly the case with the common ECU we provide to Formula 1: the hardware is standard; the teams each code the software to best exploit and use the ECU to their advantage.

Just as it does today, it will provide engineers with powerful race-winning insights, but in 2050 it will be a fully immersive data experience. Engineers will be able to physically interact with virtual manifestations of the data seamlessly. It’s Minority Report meets motorsport. Although we cannot guarantee that ATLAS will come with Tom Cruise.

Grand prix racing is the most data rich sport in the world. Engineers watch the race unfold in front of their very eyes, not on the television screens, but through the data. In 2050, this data-driven narrative will be readily available to fans to enhance their engagement.

Fans will know exactly why one driver is quicker than the other through a sector, what time they were expected to set and the reason for the delta. Just as is the case for the contestants on Big Brother, there will be nowhere to hide. And sticking with the reality show theme, data scientists and software engineers will probably become the most exciting thing since Love Island. Albeit with less fake tan and implants.

A greater stake in the sport you love

Our blueprint for the future of grand prix racing gives fans a greater stake in the sport they love. A vision of the future inspired by them – made possible by McLaren Applied.

It breaks new ground in fan entertainment, artificial intelligence, human performance, as well as motorsport and automotive technology. Its beauty lying in its integration of key industry trends and cutting-edge innovation. The latter not distancing fans from the spectacle, but instead setting their pulses racing with an even more exciting and accessible entertainment proposition.

With competition for eyeballs becoming only fiercer, you need a compelling reason to sit down and watch grand prix racing for two hours, and we’ve provided just that. You will be entertained in 2050 and beyond.

Because after all, is this not why you are here? 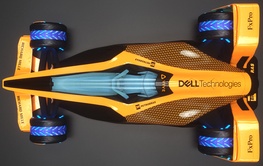 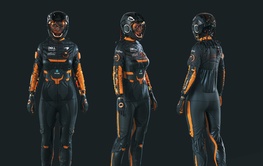