You can spend millions of dollars on research, design, manufacture, testing, drivers, and personnel in the pursuit of speed. Yet when the talking stops and the cars hit the track, there’s just one thing that connects all that investment, and hard work, to the asphalt.

They are critical to performance. Getting the best from a tyre is essential to unleash pace, and over the course of a race, managing the life of a tyre is just as important. Therefore, any way to master tyre management has become key to success.

One such way is to adjust tyre pressure. But just how do you accurately measure the pressure of tyres on a NASCAR Cup stock car travelling at over 200 mph?

The solution comes from McLaren Applied.

After more than a year of development in collaboration with NASCAR, McLaren Applied created the Tyre Pressure Monitoring System (TPMS) for the series. The system comprises four wireless sensors – one fitted to each wheel – and four antennas fitted inside each fender, as well as a receiver which is integrated into the McLaren Applied-supplied PCU-500N digital dashboard display. And for 2019, a separate receiver has been developed, enhancing the system’s flexibility and ability to be a stand-alone solution.

McLaren Applied has a wealth of experience with tyre pressure monitoring systems, having developed and successfully introduced similar products for Formula 1, IndyCar, and MotoGP. However, unlike the systems for these series which also monitor tyre temperature, the system developed for NASCAR is solely designed to measure tyre pressure – specifically the pressure between the outer tyre and inner liner on NASCAR Cup stock cars.

But just what makes the TPMS such a success story in the white heat of competition?

Well actually, it’s a lot do with heat. McLaren Applied tyre pressure sensors perform lap after lap at extremely high temperatures – most commonly found on short oval tracks. The constant braking, turning and enormous rotational forces lead to incredibly high temperature build-up in the tyre. With NASCAR disc brakes reaching temperatures of 1,800°F, it’s not uncommon for tyres to melt onto the wheel rims. Despite this, the McLaren Applied  TPMS is more than up to the challenge.

NASCAR needed a system that was secure when it came to the measurement, transfer and storage of data. This demand was nothing out of the ordinary for McLaren Applied – experience gained from developing the Formula 1 TPMS providing plenty of expertise with regard to incorporating impenetrable layers security. Advanced security features built into the TPMS ensure that the radio frequency (RF) signal transmitted from the sensors is entirely secure and can only be viewed by the relevant team.

The TPMS is also easy to fit and straightforward to operate, with wireless sensors attached to the wheel using a simple housing mounted to the steel rim mandated for the series. In addition, the TMPS features automated corner recognition. Whenever a wheel with a McLaren Applied  tyre pressure sensor is fitted to the car, all the data is immediately logged as having come from the specific corner of the car relating to the wheel position, such as front right or rear left.

They say looks can be deceiving and the space frame chassis construction of a NASCAR Cup stock car means that while it may look like a saloon car on the outside, on the inside it’s far from it. All this space means that RF signals transmitted from the antennas become harder to identify and locate, as the signals spread through the car. This is particularly prevalent at the rear where, unlike the front, there is an absence of a roaring V8 located between the wheels. This is where extensive on-track testing came to the fore to fine tune radio frequencies and antenna positioning, ultimately ensuring optimal performance. 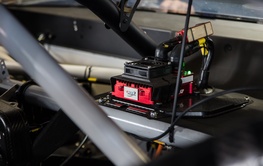 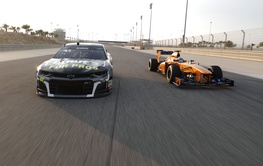 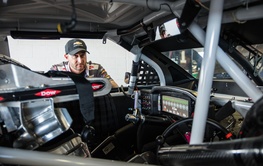