Sensory overload, stifling humidity, temperatures exceeding 50°C, and breakfast at lunchtime. Just how do you prepare for the toughest race in Formula 1?

Singapore’s Marina Bay Street Circuit is five kilometres long; the straights are fast and bumpy, and the corners – a staggering 23 of them – are tight and narrow, just like Monaco.

These ingredients make for a punishing drive just shy of two hours. Factor in the heat, the traffic, and the relentless nature of the circuit and Formula 1’s drivers get zero rest.

This, then, is Formula 1’s most punishing race.

The sheer stop-start nature of the track is particularly punishing – drivers are repeatedly braking from high speeds, and change gear around 5,000 times during the race.

Every time a driver hits the brake pedal, they have to apply upwards of 80 kilograms of force to slow the car down. The mere fact that they can do this consistently for almost two hours is just one of the many reasons why Formula 1 drivers are some of the fittest athletes in the world.

The lumps and bumps of the rough track surface introduce further stress due to the extreme vibrations pummelling the drivers’ bodies. It also plays havoc with maintaining vision, and can eventually fatigue the autonomic and central nervous system through sensory overload.

Although g-force loads are on average slightly lower than those experienced at some other Formula 1 circuits, the relentless cornering places considerable strain on the muscles to the side of neck and shoulders.

To make things even tougher, the circuit runs in an anti-clockwise direction, comprising 14 left- and nine right-hand turns. With most circuits running clockwise, drivers are able to build up greater resistance in their necks to the lateral loads – at an anti-clockwise track, they are usually a little more vulnerable.

Consider the prospect of enduring all of the above, while sitting in a cockpit where temperatures exceed 50°C. The consequences of being immersed in such a hostile environment for a long period are difficult to ignore: drivers lose between three and four kilograms in body mass caused by water loss and depletion of glycogen (energy) stores.

Imagine cycling in a sauna (40°C, 70% humidity) wearing fireproof overalls and a helmet for two hours. This provides some context to what Formula 1 drivers tolerate, and underlines why athleticism to the highest standard is crucial just to avoid heat stress, let alone win a race.

By the latter stages of the race, the driver is likely to be pushed into an near-dysfunctional state, where cognitive (attention) and sensory (vision, hearing, vestibular) functions are heavily compromised. It is therefore perhaps no surprise that the Safety Car has been deployed at least once in every Singapore Grand Prix since its inaugural event, back in 2008.

The challenges presented by the Marina Bay Circuit certainly reinforce the need for a driver to take significant steps to prepare both physically and mentally. The combination of repeated highly physical braking and steering manoeuvres, head wrenching g-forces, extreme temperatures and severe mental loads are not easy challenges to overcome.

So, the crucial question is, how do Formula 1 drivers prepare for such an extraordinary test?

Drivers usually arrive on the Monday, six days prior to the race to acclimatise to the 30-40°C heat and 70% humidity. The effects of acclimation training are transient; unless you live in comparable conditions, arriving early is key to immersing yourself in the actual environment. Heat acclimation is the most important aspect of preparation for the unrelenting Marina Bay Street Circuit.

Ordinarily, when training for extreme climates, drivers would perform a two- to four-hour bike session in dry heat. However, due to the humid heat in Singapore, drivers will perform shorter training sessions in environments designed to replicate the atmospheric conditions.

This is important because rising temperatures will influence heart rate and core temperature. Both elevate over time without an increase in workload and this forces the body to increase sweat rate to cool itself. It is therefore crucial that a driver’s cardiovascular fitness is of the highest level, to allow the body to function under such duress and minimise fatigue.

The anti-clockwise nature of the circuit and continuous cornering puts physical fitness into the spotlight only further. For McLaren’s Carlos Sainz and Lando Norris, this is when the work they have done to condition muscles in the shoulders and neck using McLaren partner Technogym’s ‘F1-Trainer’ comes to the fore. It replicates the driving position, and in combination with a steering load system and additional equipment, develops the important upper body segments.

Throughout the weekend, drivers and teams keep their clocks and watches to European time zones, so the acclimation process doesn’t involve the additional (and often depressing, difficult) task of altering sleep and meal timings ahead of the event. However, staying on European time in Singapore means that blackout curtains are vital: bedtime usually begins at around 06:00. Oddly for staff at Hilton's Conrad Centennial hotel, which is just a short walk from Turn 6 along Raffles Boulevard and 10-minutes from the paddock, Carlos and Lando can be seen wandering down for breakfast at 14:00 which equates to 08:00 in Europe.

The race starts in full darkness at 20:10 local time. But for non-time-altered drivers, this is the equivalent of a regular mid-afternoon race in Europe. In addition, the hugely powerful trackside lighting system does a fantastic job of rendering the track in near-daylight conditions. It’s not quite perfect, however, and the drivers usually compensate by using an anti-glare visor. The issue of visual impairment has not been commonly raised by the drivers.

After waking, a driver usually performs a short mobility and stretch routine – typically using yoga and Pilates-based movements. This is very important to alleviate stiffness, prepare for the morning training session, and ultimately avoid injury. This is followed by a wholesome breakfast (at lunchtime!), which may include oat-based cereal, nuts, fresh fruits, eggs and a coffee to awaken the senses.

Morning training begins with a pre-activation session led by the driver’s performance coach. This may take place in the hotel fitness suite or outside if further acclimatisation is required. A driver starts with floor-based exercise and gradually moves to more vigorous movements until they are sufficiently warmed-up.

Next, the performance coach and driver fasten their heart monitors and venture out onto the streets for an eight-kilometre run. Intensity is gradually built up over the first one or two kilometres and then, as the distance is completed, it’s possible to add in some short high-intensity intervals, followed by a recovery period.

Throughout the run, it’s imperative that a driver takes regular sips of fluid from their bottle, which includes measured levels of electrolyte supplement.

Sweating causes fluid loss and removes minerals from the body: to avoid the detrimental effects caused by such losses, drivers perform sweat tests which measure fluid and mineral loss. This scientific practice allows the performance coach to calculate the right amount of supplement required for pre-race and during-race bottles to keep the driver training and racing at the optimal level.

In the late afternoon, the performance coach may set up a body weight routine, partly outdoors and indoors – this allows the driver to continue to experience the local environment and recovery accordingly. To aid recovery, avert delayed-onset muscle soreness and induce relaxation, performance coaches usually provide a 30-minute sports massage. This typically takes place prior to the evening meal, after which the driver has the remainder of the evening to enjoy as down-time. 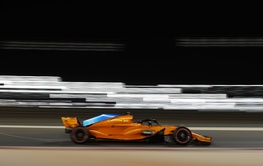