One year on from the unveiling of Project Invincible, we delve into the technology behind the innovative personalised healthcare solution made using the same materials and processes that went into the MCL33 Formula 1 car.

Project Invincible came in response to a challenge from a single client to design a device to help protect vital organs after surgery. McLaren Applied designed and produced a fully wearable composite shield that does the job of the rib cage – protecting vital organs including the heart and the lungs, with the garment providing further protection from unexpected low energy impact.

From digital therapeutics, to tailored human performance programmes and bespoke medical devices, McLaren Applied aims to innovate healthcare solutions that can be tailored for individual patients.

The common thread in all its projects is data. Data is used to build a digital picture of how a patient is performing or recovering, and then create solutions, or in the case of the Project Invincible, devices, to aid users.

Project Invincible was designed completely around the user, and entirely data-led. It delivered on every level because the team listened to the data throughout the process, from concept to build.

All about that base

A base garment was required for the shield to be affixed to, so that Client X could remove it when it was not needed, but also easily add the shield at any time.

Comfort and durability of the base layer was essential, but it had to maintain sufficient structural integrity to keep the shield in place. It was constructed from natural and artificial fibres, designed not to hinder breathing while being form-fitting.

Tencel polyester elastane was used to wick away moisture and cotton polyester for absorption – the two fibres entwined into one fabric and tailored to Client X using body scan data. This was coupled with a Velcro tensioning mechanism to enhance closeness of fit.

The base layer also features a soft, non-Newtonian silicon foam pad around the kidney area to provide protection and additional support to Client X’s kidneys which are slightly compromised.

Formula 1 has become synonymous with carbon fibre. McLaren pioneered its use in the chassis of the cars with the MP4/1 – the first carbon composite Formula 1 car. However, carbon fibre alone wasn’t enough for Project Invincible.

Although it is sufficiently lightweight and stiff, it fails in a very brittle manner – splintering into multiple pieces. Something to be avoided near a human body!

McLaren Applied sought more ductility by layering a number of other fibres alongside carbon to ensure that when the shield fails, it bends and never fractures.

The strongest man-made material, Zylon, was used. It has a cross-sectional strength that outperforms steel and carbon fibre, and is a material that McLaren pioneered in Formula 1, with it now used in all cars for side-impact protection.

Between the shield and the base garment – located at each of the points where the shield meets the body – a non-Newtonian, energy-absorbent, viscoelastic silicone gel is present. The gel can diffuse the loads placed upon the shield thanks to its auxetic geometrical makeup.

Impact testing was undertaken at the Cranfield Impact Centre, where the homologation crash tests for Formula 1 monocoques are performed. The tests consisted of dropping differing masses from varying heights directly onto the shield.

Firstly, there was a 30 Joule impact, which is akin to dropping a 6 kg bowling ball onto your chest from waist height. This test was carried out repeatedly and the shield passed faultlessly every time.

Other impact scenarios were tested, such as the sudden tightening of a seat belt under sharp deceleration. Throughout every test the shield did not reach failure point.

McLaren Applied worked its way up to testing a 150 Joule impact event, effectively dropping five bowling balls, or around 35 kg, onto your chest from a few feet up. The shield performed exactly as desired. It retained its shape, but cracked much like a crumple zone on a car, dissipating the energy.

Similar to the production of a new front wing on a Formula 1 car, the raw materials of the shield were cut into shape, laid into a mould and resin was poured into it.

It was then placed into an autoclave where high temperatures (around 145°C) and pressure were applied to cure the resin and compact the fibres.

Afterwards, the staff at McLaren Racing continued to work their magic by polishing the shield, much like a fine sculpture, or the aerodynamic works of art that feature on a Formula 1 car to direct airflow and generate downforce.

Learn more about McLaren Applied’ work in health and wellness. 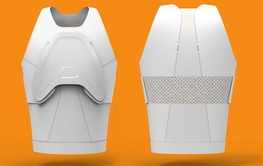 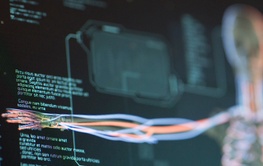 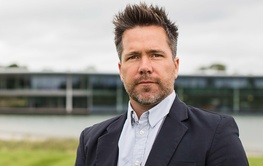