Formula 1 Drivers are some of the fittest athletes in the world and adhere to unique strategies of physical and mental preparation.

Onlookers may have the opinion that drivers don’t really do a lot, after all they are strapped into a seat and are limited in capacity of movement. Obviously, the latter is true, however being a driver at the pinnacle of motorsport requires a combination of exceptional talent and athletic prowess.

Formula 1 in 2018 could be considered the most challenging era both physically and cognitively, with cars now generating greater levels of downforce and increased performance in cornering. The consequence of this is higher levels of gravitational force, which places tremendous strain on the driver’s body.

In context, a driver’s head and helmet weighs approx. 6.5 KG, then factor in possible 5-6 G under braking and laterally (cornering) loads equate to 30-40 KG. To provide some perspective, this is equivalent to resting a 10-11-year-old child on an unsupported head, which of course is not advised!

There is also a huge physical strain placed on the neck and abdomen when cornering, as repeated isometric contractions are required to stabilise the position. Furthermore, unlike the cars we drive, a Formula 1 car requires a great deal of force from the driver’s left leg when braking, resulting in repeated efforts of approximately 80-100 kg against the pedal. These examples demonstrate how drivers require the highest degree of robustness, stability and lower extremity strength.

An F1 driver must wear layers of protective clothing and a helmet, both of which are essential safety features. However, with cockpit temperatures reported as 50°C and humidity of 80% at circuits like Malaysia, they contribute to an already hostile environment that the driver’s must tolerate for 90+ minutes. Due to such conditions, a driver can lose as much as 3kg of body mass in a race and dehydration to such a degree can be become detrimental to cognitive function. In order to avoid such losses, drivers maintain low body fat levels to aid with effective thermoregulation, and they do this through strict nutritional strategies and regular endurance training.

During the F1 summer break, Driver focus on two main areas of human performance training; endurance and strength. Drivers should already be at optimum fitness levels, so maintaining levels of fitness is the main objective.

Drivers typically perform their endurance training in the morning, at the time when metabolically efficient. Due to the fact drivers don’t have a set cardiovascular preference (they cannot train within a car/while driving), they can enjoy a multi-discipline approach and can sample cycling, running, rowing, swimming or even cross-country skiing. Like all elite athletes, the intensity and volume of training is carefully manipulated daily to optimise recovery and maximise athletic potential. Drivers use heart rate monitors to help guide their endurance sessions, which is especially useful when replicating the conditions and duration of a race.

Furthermore, the SKILL-BIKE is fully adjustable and its ability to be set-up similarly to a road bike is ideal for a racing driver when looking to perform their interval training sessions.

Racing includes managing a multi-axial acceleration of the neck, head and torso, large leg strength and stamina all the while being ready to react to acute visual stimuli, such as another driver losing control. To withstand the extreme stresses of F1, drivers must train according to these demands. Carefully tailored programs are formulated with goal-orientated phases, allowing the driver athlete to develop during the offseason and then maintain and prepare for competition during the season.

Despite the loads described, the head is unsupported in a sideways and forward motion, only limited by the tether straps which link the helmet to the Hans device (designed to stop the head rapidly decelerating in an accident) making it constantly vulnerable. Therefore, unlike many athletes it is important for a driver to condition the shoulder and neck complex so they can maintain visual perspective. Technogym developed an ideal piece of equipment, which resides in the McLaren Fitness and Wellbeing Centre known as the ‘F1-Trainer’. This replicates the driving position, and in combination with a steering load system and additional equipment, develops the important upper body segments.

In addition to this, drivers also perform free weight, body weight and cable exercises such as seated rows, shoulder shrugs, lateral raises, rotator-cuff (shoulder stabilisers) internal/external rotations, pull-ups, push-ups and various stability ball combinations. These all contribute to build up the significant upper body strength and endurance required to manage over and understeer so that they can control the car sufficiently throughout a race.

In terms of lower-body training, the power braking motion is performed by the left leg which is categorised as a unilateral (one limb) movement. Therefore, performing unilateral exercises are very important and help provide a strong and stable base in which to generate enough force to slow a Formula 1 car.

From a sports specificity perspective, using the Technogym Medi-Leg Press is an ideal solution to compliment the ‘bread and butter’ leg strengthening exercises using free weights, which can vary through squat combinations, deadlifts, lunging and kettle-bell swings.

Strength training provides the driver a foundation in which to generate force, however to maximise their potential under braking drivers may also perform ballistic and plyometric exercise e.g. jump squats, single leg hops, skipping and throwing medicine balls. Albeit drivers don’t need to focus on this aspect of training extensively, it still forms an important part of a neural stimulus in their training and racing warm-up protocol. 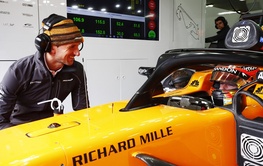 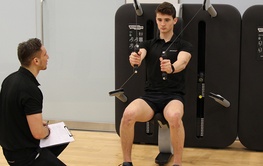