McLaren and Sochi Autodrom have more in common than just Formula 1. Both boast an Olympic pedigree.

Nestled between the Black Sea and Caucasus Mountains, the Russian Grand Prix held at Sochi Autodrom is certainly not short of aesthetic appeal. It’s further enhanced by the spectacular architecture of the Olympic Park, around which snakes the circuit’s demanding 5.848 km ribbon of asphalt. The Park is home to state-of-the-art venues built for the 2014 Winter Olympics, including the Bolshoy Ice Dome and the Adler Arena Skating Centre.

McLaren Applied’s proven track record of unlocking and delivering extraordinary human performance was in the spotlight at those Games, as we designed Lizzy Yarnold’s Olympic gold medal-winning skeleton sled.

From asphalt to ice, Formula 1-derived, data-driven insight meant that the finished sled gave Yarnold the tools to go fastest in each of her four runs and take victory in Sochi by a cumulative 0.97 seconds. That’s an even bigger margin in skeleton than it would be in Formula 1!

We used telemetry, computer simulation, wind tunnel validation and materials technology to improve the sled’s aerodynamic efficiency and structural integrity. The sled was completely bespoke to Yarnold, and optimally configured to suit the track at the Sanki Sliding Centre – the scene of her Olympic triumph.

Our Formula 1 manufacturing expertise also led to improved sled production. It ensured that high-quality, fully adjustable components remained reliable and performed perfectly every time they hurtled down the unforgiving frozen track at speeds of over 130 km/h.

Ahead of the 2012 London Olympic Games we collaborated with Team GB’s cycling, rowing, sailing and canoeing teams to help deliver 30 medals – 15 of them gold. Britain’s leading athletes reaped the rewards from the same performance management systems designed to help Fernando Alonso and Stoffel Vandoorne shave fractions of a second off their lap times at the Sochi Autodrom.

As cyclists careered around the velodrome, the Datarider relayed this information to the team for analysis to establish where gold medal-winning, tenths of a second could be saved.

It was a similar scenario out on the water.

We developed a bespoke paddle design with a built-in sensor and transmitter that could be used during training to send real-time data to a coach's laptop, so a range of parameters could be monitored, such as strength, efficiency and length of stroke. We also placed sensors on the athletes to capture biomechanical data, enabling coaches to generate a better understanding of what was going on under their skin to identify weaknesses and areas for improvement. 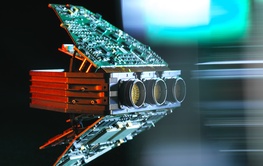